I recently watched "Let Me In." The movie is a love story, and is a perfect inversion of the Twilight movies (sorry didn't read the books). Instead of hokey and sappy, the movie is dark and gritty. Instead of a girl falling for manpire, it is instead a story of boy falling for a vampgirl. 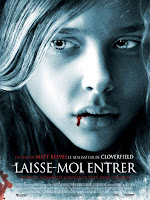 The movie is a metaphor for the obscene, dark-side of love. In the movie, a young boy falls for a young vamp girl. But, in order to maintain his love for vampgirl he must learn to accept her as a monstrous Other. (When he asks if she'll go steady with him, she replies that she can't because she's "not a girl." She's a monster.) Ultimately, to love her, he must sacrifice his duty to the human race, because for her to survive she must kill. After witnessing her murdering people, he decides that she means more to him than human life, and at the end of the movie becomes her accomplice in killing others to keep her alive.
"Love is evil" says Slavoj Zizek. And he is right. Love is loving the Other as Other. Love is accepting the monstrous Otherness that exists in one person, even though we cannot understand it, and can't approach it. Singling that one person out from the entire universe as somehow special, unique, and worthy of praise. This is a violent act. It is a sacrifice. By separating the one, from everyone else, we renounce our duty to the world, and instead commit the evil of valuing one single life, above the lives of everything else. See Derrida in The Gift of Death.

The fact that love is evil, is not a reason to renounce it. On the contrary, love is a break from the entire human order. It is a liberating, but it is also a heavy burden. The act of love elevates the one to the level of the Thing, and is sublime. Love, love, love.
Posted by Pr1nc3_Ch4rm at 9:47 PM 5 comments:

Bigotry and Stereotyping and Mormons

Survey results show that many people would not vote for someone based on their religious identity. Mormons, Muslims, and Atheists all had particularly poor showings.

I recently had a Facebook debate with some friends regarding whether this amounts to bigotry. Bigotry is the stubborn intolerance of another person's beliefs. Is not voting for someone, merely because of their religion, bigoted?

Almost all of my friends, who argued that it is not bigoted, relied on generalizations of religious people that are unwarranted. One of those generalizations (stereotypes?) is that religious people lack critical thinking skills (which is apparently why we believe in crazy stuff like an angel showing a kid where a golden book is buried). Considering that there are very many intelligent leader in every religious group, I think this is a faulty assumption. (Not to mention offensive.) This is not to say that all religious people are smart - there are a lot of dumb religious people too. The simple fact is that no matter what group you look at Mormons, Muslims, atheists, you're going to get a good mix of every sort of ability set. Some are going to be real dumb, and some will be smart. Knowing someone's religion doesn't tell you much of anything about that person.

Furthermore, in attempting to justify factoring religious belief into voting decisions, one of my friends went on to say that, "everything that makes up [a political candidate] is fair game." If this is true than race, sex, and ethnicity, are all legitimate reasons not to vote for someone. Which is so wrong. All of these factors (race, sex, ethnicity) are at least as essential in forming a person, and later influencing their political behavior, as religion. To say that being black in the US is exactly the same as being white, is to have some real blinders as to the difference of experience between white America and black America. For this reason, race is incredibly influential in forming a person.

In fact, the correlation between being black and being a Democrat, is much stronger than the correlation between being a Mormon and being a social conservative (which seems to be the big hook upon which my friends hung their argument). Does that mean that it's OK for someone to take someone's race into account when deciding whether or not to vote for them? No, of course not. Evaluate belief based on people's political beliefs and behavior. Don't rely on unwarranted assumptions.

Let's go a step further, ad absurdum. Blacks and latinos have higher rates of incarceration compared to whites in the good ole USA. But it would been incredibly prejudicial to allow this to inform your decision when voting for a black candidate. Relying on broad generalizations to assess an individual of a certain group is terrible reasoning. In this instance it's straight-up racist. Each person should be evaluated on an individual basis. And when voting tolerance requires that we should give individuals the benefit of the doubt; regardless of their religion, and definitively regardless of race.

Political candidates should be evaluated on only those factors that have a direct bearing to their performance in office. Religion, race, ethnicity, gender, sexuality, do not. Past performance in office (or in other leadership roles) along with stated political preferences do.

Furthermore, my friends are atheists. They were (somewhat ironically) arguing against their interests. The basic form of their argument is the same as a bigoted religious person would put forward to justify their decision not to vote for an atheist . Religious bigots will rely on stereotypes and generalizations to justify prejudicial treatment of an atheist candidate (and poll results show that atheists are in a worse position than Mormons due to unfair generalizations). Mormons, atheists, and Muslims are all marginalized groups in US politics. We should be teaming-up, not undercutting each other. I'm sure bigoted individuals would be more than happy to join atheists in bashing Mormons and Muslims, and then turn around and bash atheists and Muslims with a bunch of Mormons, and then bash atheists and Mormons with a group of Muslims. As minority religious groups we should be building bridges of tolerance and acceptance, rather than trying to excuse ourselves for relying on stereotypes.

Basically my friends were working hard to distinguish between religious-bigotry and other forms of bigotry, in order to justify not-voting for Mormons, but this is a contradictory exercise. To justify stereotyping in politics you have to say, 'anything is fair game!' Anything about a politician can influence who they are, and should therefore be used to evaluate a person. But this begs the question, race and gender are essential parts of a person? Are they fair game? We've gotten past the point where it's OK to say that race is a factor. So then my friends make the move saying that race is different or 'Most aspects of a person - race, gender, sexuality, etc. - are not fair game!' So put it together and you get, every part of a person's social identity is fair game, besides most every social identity (with the exception of religion). This move attempts to mask the contradiction, but it doesn't do a very good job. Unless they're doing some Derridean move that I don't understand. Absent that, I spit on your faulty reasoning. Ptooey!
Posted by Pr1nc3_Ch4rm at 10:47 AM No comments: