Holes are for moles.
They break through the surface
of the brown Earth with
their pink snouts.
It is obscene.
Posted by Pr1nc3_Ch4rm at 11:03 AM No comments: 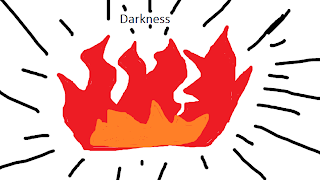 “…Yet from those flames. No light, but rather, darkness visible.”

A central tension in the work of Hannah Arendt’s work involves the nature of evil. Is evil radical or is it banal? In her correspondence with Scholem, Arendt says that she has changed her mind on the nature of evil and has decided that it is never radical.  She says the following:

“[Evil] spreads like a fungus on the surface. It is 'thought-defying,' as I said, because thought tries to reach some depth, to go to the roots, and the moment it concerns itself with evil, it is frustrated because there is nothing. That is its 'banality.' Only the good has depth and can be radical.”

For Arendt, evil is banal, NOT radical, because it lacks depth. According to St. Augustine evil is merely the absence of good. It does not have a positive existence, but is nothing more than lack. This corresponds well with Arendt’s description of the thinness of evil, and its lack of substance. While Arendt's evil lacks substance like in St. Augustine's philosophy, Arendt’s description of evil as the perversion of Kant's categorical imperative in Eichmann in Jerusalem also fits Emmanuel Kant’s model of “radical evil” very well. And Arendt refers to totalitarianism as radical evil in a very Kantian way in her book Origins of Totalitarianism.

Kant created a taxonomy of evil with three categories: frailty, impurity, and perversion. Frailty and impurity are low level evils in which a person is still motivated by the categorical imperative, but either fails to live up to her duty, or else fulfills her duty because she is motivated by extraneous desires. Only in the case of radical evil, or perversion, is a person no longer motivated by a categorical imperative. Instead, radical evil/perversion involves turning morality on its head and substituting the letter of the law for the spirit of the law. In this case a person ceases to use duty as a standard to judge their weakness against, and instead use duty as a means to justify their actions. This is exactly the uncritical attitude towards one’s actions that Arendt found in Eichmann. Therefore, Arendt seems to accept Kant’s description of evil, even if she does not accept his label. It is not clear if Arendt's concept of evil is banal (Augustinian lack of goodness) or radical (Kantian perversion).

I have decided that I agree with Arendt, in her correspondence to Scholem, that evil is not radical but is banal. Saying that evil is radical suggests that it is somewhat heroic. But evil is cowardly. Evil, the perversion of the categorical imperative, comes to pass because people are not courageous. They satisfy themselves by saying that their activity is in accordance with some law or duty, rather than challenging themselves and questioning whether the way they live is according to moral maxims or just according to custom. Evil happens because people doubt their moral feelings of sympathy. We stop trying to imagine the impact of one’s actions on others, because it is too difficult, and we don't want to change to accommodate others (especially others that don't look or act like us). This relates to St. Augustine’s concept of evil as the mere absence of good. Evils is the absence of imagination and compassion. Evil is passive. Because evil is passive and cowardly, it is very banal. It is never heroic.

Saying that evil is “radical” also suggests that evil is creative or new. It is not. It lacks creativity and is merely the passive acceptance of suffering. That is why Arendt says that left alone evil will passively cover the Earth, “like a fungus,” without active effort on the part of individuals to imagine how they can improve the World.

The banality of evil fits Eichmann very well, because he was an unimaginative, pathetic bureaucrat. However, I wonder what Arendt would say about the Fuhrer himself? He may be an example of radical evil; because he was the source of everyone else’s perverted law. Was Hitler active evil? In him it seems we might have an example of sadistic courage. He even went to jail for his beliefs at one point.

So, is Hitler an example of positive evil? I tend to think no. Hitler was probably a coward that could not face his own perverted self. He was not creative or imaginative at all.

A better model for radical evil may be Satan in Milton’s Paradise Lost. He rejects God, develops his own personal ethics, and chooses to resist God’s will despite the impossible odds. Satan is the hero in Paradise Lost (and not even really an anti-hero like in popular shows like Breaking Bad); but he is also supposed to be evil (he is Satan after all). However, Satan's behavior in Paradise Lost is likely more in tune with Kant/Arendt’s model for good, not evil. So Milton’s Satan may not be a candidate for radical evil either. Alternatively, if Milton's Satan is evil, then he is probably just a resentful reactionary, and therefore guilty of being banal for pathetically justifying his lack of creativity.

Inclusion Through Exclusion: Exempting Mercantile Customers to Encourage Them to Contribute to Energy Efficiency Goals

Inclusion Through Exclusion:
Exempting Mercantile Customers to Encourage Them to Contribute to Energy Efficiency Goals

I.       INTRODUCTION.. 1
II.         ENERGY EFFICIENCY COST RECOVERY MECHANISMS. 1
III.       OHIO’S EXEMPTION FOR “MERCANTILE CUSTOMERS.”. 3
IV.       THE COMMISSION LIKELY HAS BROAD DISCRETION TO STRUCTURE AN EXEMPTION UNDER OHIO REV. CODE ANN. § 4928.66(A)(2)(C) TO ENCOURAGE MERCANTILE COSTUMERS TO CONTRIBUTE TO ENERGY EFFICIENCY IN OHIO. 6
a.      The Commission likely has the authority to require the utility to encourage mercantile customers to treat rider funds as exclusively tied to energy efficiency investments, because doing so “reasonably encourages [mercantile] customers” to commit their capabilities to the utilities energy efficiency program. 7
b.      Requiring the utility to create a mechanism to recoup funds when mercantile customers fail to use funds to increase energy efficiency is likely within the Commission’s authority. 8
c.      Less than full exemption is likely the best policy. 9
i.       The Commission likely has authority to adjust the level of exemption under Ohio Rev Code Ann. § 4928.66(A)(2)(c), because retention of a portion of the funds from mercantile customers can still “reasonably [encourage mercantile] customers to commit their capabilities” to energy efficiency programs. 10
d.      The commission may have discretion to disallow credit for past energy efficiency investments, despite the ambiguous language regarding “existing or new” capabilities. 13
VI.       CONCLUSION.. 16